Tantra At The British Museum 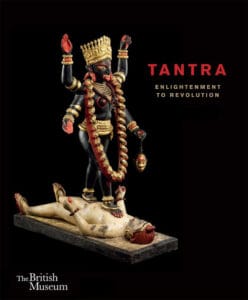 Whilst the British Museum may seem an unlikely place to hold a Tantra Exhibition, I was impressed with their effort and found the exhibition compelling.  They have dedicated a small space to some fascinating artefacts of historical Tantra and the mood and effect are mesmerising.

Entering the exhibition, you are met with reliefs and statues of the goddesses in their enticing and deadly power, some sitting in meditation whilst another depicts Durga delivering a death blow to the Buffalo Demon Mahisha.  My favourite is a relief of the wild boar goddess Varahi, a powerful character who is pretty apt at the moment as she is said to both prevent and cause epidemics.

To those perhaps more accustomed to the Elgin Marbles, this is a sharp juxtaposition to most of the other exhibits there.  The exhibition covers only the most recent history of Tantra, the history that is clearly defined by archaeology, and yet the creators of the exhibit manage to bring Tantra to life as more than a mere historical curiosity.

For Tantra is not about stone carvings or items of beauty, Tantra is a living phenomenon, a way of life. Tantra is about Shakti energy, the divine feminine energy of action that imbibes and permeates the entire Universe, giving life.  In the face of our patriarchal religions it’s easy to think man created life in his image, and yet here we are reminded of the biological fact that life comes from the female, and life is everything from tigresses to butterflies.

A recreation of the Hirapur Yogini Temple in Odisha brings to life what on a shallow viewing could perhaps not inaccurately be described as a death and sex cult.  Videos and recording of ancient scriptures bring to life the beauty and yet the deadliness of the dakinis.  Yet in both sex and death is life itself.

“One cannot obtain liberation by means of soothing and pleasing antidotes.  Wander in grisly places and mountain retreats” is a millennia old quote from Tibet that adorns the wall, and this really sums up both the ancient practice of Tantra and what it is to millions of people today.

As a Tantra worker, I am well aware of the journey into the darkness to find the light.  Not only have I had to do extensive work on my own shadows, I help my clients to embrace their darkness and transform it into their power and light.  Tantra never was about pleasure and sensuality.  Those who read it in that light are sorely mistaken.

Tantra is about the journey into all those things that we fear, the abandonment and power of sexual desire and ecstasy, the mysterious feminine, and most of all death.  A bone apron and instruments made from skulls may not be that different from the ossuary’s that are hidden away around Europe, yet in Tantra these are not hidden away.

Kali proudly wears a necklace of skulls around her neck as she straddles various male victims, symbolising the power of women which lies perhaps not in our rage but in our ability to endure.

The Exhibit implies Tantra as a recent phenomenon, as being perhaps 1,500 years old.  But there is no way such an advanced spiritual and philosophical system will just spring up overnight.  Of course, the artefacts here date from this time but they belie an ancient history that has made its way into many cultures, influencing the Tibetans, Chinese, Indians and even the Sufis.

The word Tantra, which means a web or loom, referring to the web of Shakti energy that binds the physical dimension together, is merely a term used to describe an ancient way of thinking and being.  It can’t be called a religion in the sense that Christianity or Islam are.  Sure, Tantra has scriptures and priestesses, but it has no boundaries, no ego and no taboos.

Walking through the exhibit you meet artefacts from all over Asia, not just India but Tibet, Japan, China and even from Sufiism.  You definitely get the sense of an energy that is beyond any physical boundaries, that permeates through cultures leaving its indelible mark with the message that it’s only by facing, accepting and embracing death, facing our demons and fears, that we can become whole, that we can reach enlightenment.

Then there is a whole section dedicated to the Goddess Kali.  A perhaps much misunderstood deity, she embodies the power of woman in its raw and uncivilised form, the passionate and savage nature of the tigress who will destroy without thought to protect her young.  No wonder that the Victorian colonisers were disgusted and intimidated by what she represented, she is the anathema to Victorian morality and mores.

A Yantra depicts the Goddess making love to Bhairava whilst on top of her partner Shiva.  It’s suggested that this is indicative of the cosmic hierarchy with Kali, the volcano, the tornado, the big bang, as supreme creatrix.  Yes, it’s about the inseparability of sex and death at the centre of human existence, but it’s also about the transcendence of ego, ego death, and the need to return to what is true in order to really experience and benefit from the nature of our existence.

The last part of the exhibit is modern art that brings Tantra into the lives of the inhabitants of our past century.  The quote “Tantra, for me, was an internal urge, a call to understand the truth that is the source and underlying principle of everything”; is written above modern paintings which depict Tantric ideas and principles in the light of modern spirituality and even quantum physics.

For Tantra is more than a belief system or religion that is defined by boundaries or exists because of the beliefs of its adherents.  Tantra is a living energy that can be connected to by anyone willing to look deep inside and to challenge their shadows, their darkness, and the norms of their society with its manners and customs designed to hide the fact of what it truly means to be human.

The British Museum are currently hosting an exhibition on Tantra.  It’s open until January 24th

Tantralink is a hub for promoting tantra workshops, events and festivals. Listing tantra teachers and tantra therapists both national and international. This is a gateway into authentic teaching both classical and the western dualistic approach.